Skip to content
Previous Next
Coaching as a Leader: Building Team Health (PART 1) 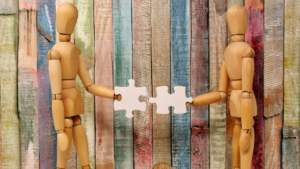 PART ONE: Building with Intention

We all know that leadership roles at any organization come with heaps of responsibility: there’s metrics to be analyzed, budgets to be tracked, progress to be continuously measured and questioned. It is a constant journey that never ends, but we push forward with the hope that we’ll be able to learn from past mistakes and become more successful (and efficient) as each quarter or year passes. These necessary tasks requires a lot of time and energy and, often unintentionally, the intentional focus on people can fall by the wayside. Everyone is doing their thing, and whether you’re a manager, a director, a VP or a CEO, your team sure isn’t going to interrupt your busy day if they don’t have to. They know you’re busy. So it’s the job of any leader anywhere to send the message that we are present.

Creating and enabling healthy teams is just as crucial as all those metrics and numbers, and often something invisible within that data when numbers drop and we can’t understand why. Behavioral outcomes and team health can be and should be measured as well. I’ve worked both as a coach and a manager across diverse domains, and one thing has remained a constant in the decade that I’ve been doing one or the other or both: you can have all the pretty graphs and charts and numbers you could ever want to measure success, but supporting team health absolutely has to be a priority. Without fostering good communication and support for the people who need it, we are nothing. So let’s give folks the tools and support they need to be able to succeed, starting with intention.

If you’re anything like me and you’re in a leadership role, you have a calendar crammed full of meetings every day and minutes fly by like seconds, and those meetings only increase the higher up you climb. Making time for your people sends a multitude of messages: that you know what’s going on, that you’re invested, and that you care. When you fly by the seat of your pants, zoom from meeting to meeting and just swing by people when you need something, that sends a pretty strong message. Having your teams participate in something like a daily standup (part of Scrum methodology) to have folks share what they’re working on is a quick and easy way to get looped in. The intent is not to have people report a status, but rather to learn where people are stuck and how you or other folks on the team can help. My teams do this on the daily, and if there’s a standup I must miss I know I’ve gotta find some time to swing by and see what’s up – a simple touch base to see how folks are doing.

And while I’m sure many of you are familiar with one on one meetings with your teams, are you intentional about what you talk about when you get there? Take the time to ask thought-provoking questions. Often employees show up expecting to give a status on what they’ve been working on. Surprise them with questions: what’s the greatest challenge facing them right now? What fills them up outside of work?” Relate to your people.

A few years ago I worked with a very quiet individual in the insurance industry. He had worked at his job for 6 years, was incredibly smart but didn’t share a whole lot at standups or with me. So I started getting curious and asking some open-ended questions, like “if you could change anything about work right now, what would it be?” Turns out he wanted to have a voice with leaders – he said they were never around, so he thought his job was to keep his head down and work, not to “come up with ideas.” No one had told him this, but that’s what silence from leaders meant to him. Together, we started working on that voice. I kept focused on where he wanted to go next by listening and giving him space to explore his strengths. By the time I left to consult elsewhere he had moved in into a role that played much more to his strengths as a product owner, helping lead his team to build better things for the people who use them.

Every day I’m bopping around my office with my laptop glued to me. Urgent asks and emails are a continuous distraction, and the work will always be there. Whenever possible, shut your laptop/lock your computer during a meeting or deep conversation with your teams. Too many times I’ve seen teams talking about really good stuff and the managers (myself included!) are eyeballs deep in emails that have nothing to do with the conversation happening around them. Your people see this. Stay present. I’ll be the first to admit this is a constant challenge for me, so I put a post-it on my laptop that literally says “BE PRESENT.” It’s a necessary reminder for me to stay in the moment and understand the full story of what’s happening around my teams.

Recently I was sitting in a planning meeting, putting out a fire via email that I had silently deemed more important than what was happening in front of me. Lost in a sea of responses and trying to identify what move to make next, I spent an obnoxious amount of time trying to solve for a problem that really could have waited. As I paused to think and returned to non-electronic reality, I noticed the team had just solved for a really big problem together and the room was buzzing with excitement about it – something that had been a struggle for a while. And I had missed it. So I did what I had to do: apologized for not being present and asked them to clarify what had happened. It was embarrassing and while they weren’t bothered by it, I knew that those moments were so much more important than an issue that would still be there in my inbox once that meeting ended. I risked leaving the team with the impression that whatever mini-crisis I was dealing with was above their conversation – these are crucial moments of collaboration.

There are always problems to be solved and issues to be fixed, which means there are always lots of problems that have BEEN solved and wonderful successes and solutions that deserve a call-out. Don’t save up praise for a one on one or a year end review. When you see success, reward it. Show gratitude. When you notice your team has been pouring a ton of hours onto a tough project that is feeling seemingly endless, pick up some delectable and amazing donuts on your way in to work or take them out to lunch to get off campus and relax a bit.

Last year one of my teams worked on a massive migration project that was a bit of a bear, and took longer than expected (imagine that!). Team members spent nights and weekends without being asked to tweak and fix what needed to be fixed in order to deliver something wonderful, which they did. Once the project was finally put to rest, I wanted to do something for the team but knew I had to keep it pretty lowkey. I tossed out a few fun ideas to the team of something different and unique to do, and we ended up doing axe throwing at a local bar. It was a blast, the team got to relax and laugh together, celebrating a job well done. Your people work hard, and there are lots of ways to recognize that in small, inexpensive actions that go a long way. It’s a worthwhile investment.

Intention is whatever we decide we want to manifest – being present with your team doesn’t mean micromanagement, it means showing up and getting your hands dirty alongside everyone else. It changes the relationship with people and helps them grow. And with great intention comes new ideas and valuable collaboration.

This blog was written by our guest blogger Tara Swanson. Connect with her on LinkedIn: www.linkedin.com/in/tararogan/

Get Your Score
Go to Top